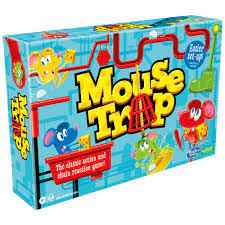 The Viking & the mouse

What tricks can you share with me for catching mice?

The Viking & the mouse

In the winter months in Ireland it can often become quite cold. As the seasons change from autumn into the winter there are downward curves in the temperatures. It is autumn now for example and one of the key indicators to the changing of the seasons and the fast approaching winter, with colder nights ahead, the mice wanna come in from the cold too.

Yes, they deserve a bit of warmth and a bit of loving too. I personally cannot stand the little feckers (feckers. Word used in Ireland as a more gently way of saying fuckers). So yes the little feckers start coming into the households around about this time of year. A mouse can squeeze their little bodies through even the smallest space so forget about weather proofing the house. They are coming if they want to and that is all there is about them. They will run behind sheetrock walls, the can be heard running along ceilings or floors from upstairs. If they are brave enough they might run across the floor in the kitchen too. Usually, they move as fast as the wind and are very quiet. Then again there are those times where you might be sitting in your own peace and quite and you hear a faint scratching type of noise coming from somewhere. Mammy mouse is in looking for material to feather her nest with. Yes they are coming into the warmth of the house looking to make a little nest for the winter and have a few babies. So we humans gotta lay a few traps and get the mammy before the house becomes rampant with them. The funny thing about when one hears a scratching noise it can be hard to pin point exactly where it is coming from. As one walks around listening and gets a little closer to where one thinks it is coming from, all goes extremely quite again for a while. They can smell us and probably smell us getting closer (the clever little feckers). So, all goes quite again and one returns to sitting in the tranquillity only to hear it again 5 or 10 minutes later again.

Why the Viking and the mouse then?

I have been likened to be somewhat of Viking type of guy, long hair with beard and over six foot tall and full muscles. Ha Ha, I paint a lovely picture of myself don’t I?

The meat and bones of the story this evening is that I spent most of my night last night playing quite literally “Cat & Mouse”. I even had the assistance of two real cats, well kittens. What did the kittens want to do though?

They wanted my attention and wanted playing and petting and messing around. I picked them up and kept putting them back into the area where I had heard the mouse scratching. The scratching noise by the way is usually the mouse eating or gnawing on something, ripping it apart with his teeth.

The mouse the little creature was in my bedroom somewhere and by my reckoning was under my bed. Somewhere close to where I lay my head. For many of you out there, this would have been no big deal, right? For me though the mighty big Viking, well yeah, it is a big deal for me. I guess I could be more of an elephant now that I think of it. I have always not liked any creature that is smaller than me and moves faster than me. The simple art of survival and all that good stuff, lol. I point blank do not like mice, I do not want to see them nor do I want to hear them scratching away. I do not want to be around them at all.

I can recall a time previously in my life when I did not mind them and would chase them and hunt them down and stomp them or play with them and return them back to the fields even. Not anymore though, no siree bob. I do not want share space with them.

So I figured a good exercise/project would be to use my blog this evening and let you all know how much of a wimp I am when it comes to mice in the home and ask for what tricks or tips (hacks) you all might have for dealing with them. I thought cats/ kittens instinctively would sniff them out and give chase and get all determined and catch em, didn’t happen. All I ended up with was two kittens starring at me as I made attempt to fall asleep on the couch. They wanted me to pet them and play with them so they kept on pawing at me for my hands. Another sleepless night passes by and I am taking to kittens and saying things to them in Spanish and bits of French words and English of course and a bit of the auld Gaelic thrown in too. I was watching their faces to see were any of my words landing. I believe the simple answer to that is, No! They wanted to pull at anything the could and knock over everything off of shelves that they could and seemed like they were doing it every time my eyes managed to close a little bit.

Are cat’s real attention seekers or what?

Anyways this Viking did not catch the mouse yet and so the saga continues. Your comments and tricks for getting them fast would be greatly appreciated. The days of me turning up armchairs and sofas and banking with the poker from the fireplace are not anymore, so what is the trick? Anyone care to comment?